SOKE HIROKAZU KANAZAWA PASSED AWAY ‘PEACEFULLY’ ON THE 8TH ‘DECEMBER’, 2019 AT THE ‘BLESSED RIPE OLD’ AGE OF 88 YEARS OLD

HIS FUNERAL WILL ‘STRICTLY BE A FAMILY AFFAIR’.

‘THE’ SKIF OFFICIAL FAREWELL ‘TO SOKE’ PARTY ‘WILL BE’ SCHDULED AT THE TIME OF THE 7TH SKIF INTERNATIONAL SEMINAR. IN MARCH 2020.

Organizers from Spartak Hradec Kralove tested Fortuna Arena before upcoming European Championship SKIF 2017, which will be held in May next year on the same place – Icehockey stadion Hradec Kralove. On the floor was 8 tatami from which 7 was used for fights in kata and kumite in all age categories for the whole weekend. Tournament finished by huge success because it released that it fits perfectly to the tournament of this size. On this year Grand Prix was seen 1300 contestants from 12 countries. Organizers of SKIF CZ are waiting for one more proof, now more of referees and timekeeping software, which will be on the tournament on May 15 in sport hall Trebes.

The third international seminar SKIF was held in Tokio with the participation of SKIF CZ members with a total of 26 classes for 3 groups of participatns, divided by  technical degrees.

There was also the Soke Hirokazu Kanazawa, who was presented at the opening ceremony and also was watching the classes for students and also for referees led by Manabu Murakami shihan. Soke Kanazawa also actively led the gradings for black belts, which the seminar was completed on Sunday afternoon. There was in the officcial program also Saturday night party, Monday’s celebrating Hanami at the Honbu dojo, but also two meetings for representatives of the federations who was talking about the upcomming World Championships SKIF in Jakarta. At one of the meetings led by Manabu Murakami shihan was discussed the vision of categories, mandatory protectors, logos on karate-gi for future championships and also European chamiponship SKIF 2017 in Hradec Králové.

SKIF CZ karate team Jaroslav Hamza, Tomáš Fejt, David Kraus, Sabina Křížová a Tomáš Tragan attended international tournament in Rivarolo Canavese in Italy. Jaroslav Hamza was third classified in individual kumite of masters. All the team was second classified as kumite team. Tomas Tragan represented also as referee. Tournament was held in friendly atmosphere which is typical for SKIF tournaments and Czech representation get not lost. Thanks to SKI-I for nice tournament.

We have been to Castel d’ Ario in Italy. 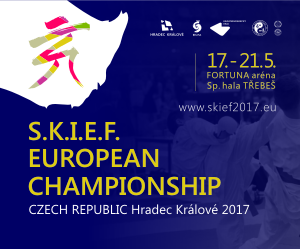